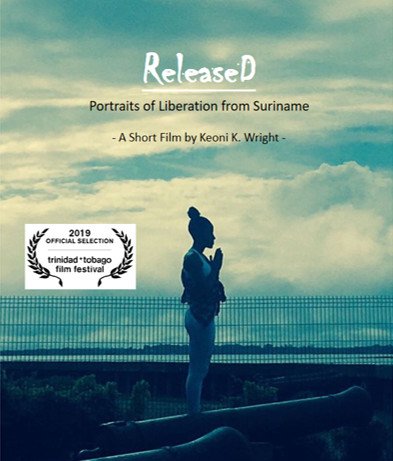 Synopsis:
This short film highlights six women of Afro-Surinamese descent who passionately express themselves through the traditional performance arts, martial arts, and visual arts. Their modes of creative self-expression contradict the original intent of the colonizers who brought Africans to Suriname’s shores centuries ago.

Keoni K. Wright is a highly nomadic, emerging filmmaker adept at capturing the mystical and magical qualities of people and places. In 2019, Keoni wrote, directed, and produced two films in the tiny South American/Caribbean nation of Suriname, including his first film, ReleaseD. After a lengthy overstay on his tourist visa, Keoni retreated to Brooklyn’s concrete enclaves to produce two avant-garde films and work in mainstream film/television production. As an artist, Keoni considers his work to be a by-product of his ancestral connections.
“If I create for anyone, it’s for them – all of my relations. All who have come before me. Outside of myself and my mother, they are the only audience I am guaranteed,” Keoni says.
Once Suriname re-opens its borders, Keoni plans to return to the country he calls his “creative control center” to produce an avant-garde documentary about Suriname’s civil war (1986-1992).
Keoni is a graduate of Boston’s Emmanuel College. He served nine years in the US Navy before being discharged due to a lengthy battle with testicular cancer. In addition to working as an associate producer in NYC”s film/television scene, Keoni also has experience in international art exhibition installation.