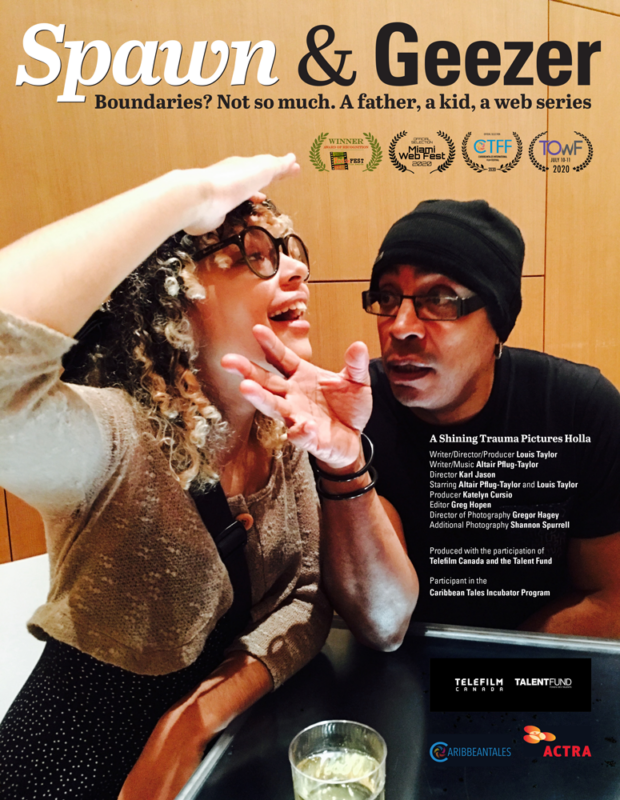 Synopsis:
This is a satirical, socio-comedic web series. It follows a 60 plus, contrarian, straight, Black father (Geezer) and his 22-year-old gay, biracial, non-binary identifying, millennial child (Spawn) as they struggle to understand each other, their evolving roles, and the ever shifting world around them.

LOUIS TAYLOR’S career in the arts and entertainment industry has spanned over 40 years. He has worked as a producer, actor, acting coach, dancer, writer, director (both in theatre and film), assistant director, casting director, outreach coordinator and script consultant. His award-winning short films have screened at over twenty-five film festivals including: Hotdocs, IDFA, the Venice International Film Festival, the Oberhausen International Short Film Festival, Palm Springs International Short Film Festival and the Tokyo International Film Festival and have aired on PBS, Bravo, Canadian Reflection (CBC), Zed TV (CBC) and Czech Television. He is currently developing a slate of television, film and theatre projects.
In 2018 he and his child, Altair Pflug-Taylor received a Telefilm Talent to Watch award for their web series Spawn and Geezer, a darkly comedic socio-satire.
So far Spawn and Geezer has won an Award of Recognition from the IndieFest Film Awards and been selected by Miami Web Fest, T.O.Webfest and Caribbean Tales Film Festival.
The project was developed through Caribbean Tales Incubator.
KARL JASON is a bold, innovative director and showrunner. His range of experience, both behind the camera and in front of it, results in strong visuals and powerful narrative. Actors get a collaborator who connects directly to their emotional centre. Producers get a director who knows how to creatively tailor a project to any budget.
Karl has directed projects filmed in North America, South America, Europe, Africa and Asia. He has a diverse range of experience in a broad cross-section of genres. His work has been seen around the world on international and local networks including The Discovery Channel, National Geographic Television Network, History Channel and Smithsonian Channel.