Aftershocks: A Tetralogy of Our Times

Synopsis:
Aftershocks – A Tetralogy of Our Times is a mosaic of short narratives, animation and montage art that explores love, humanity, and connecting while socially distant from the unique perspectives of Caribbean American communities in New York City during the coronavirus pandemic. Take a journey with us through Queens, NY from 2020-2021 and witness offbeat, love-filled stories of Caribbean American characters endeavoring to overcome the impact of the coronavirus pandemic. 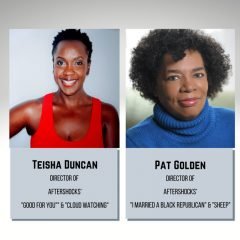 Teisha Duncan is an Actress, Educator, and Director. She is an alum of Jamaica School of Drama, Howard University and The University of Pittsburgh.
Notable Acting credits: Disney’s The Lion King, Caroline or Change, A Chorus Line, The Bluest Eye, Tartuffe, Bubblin’ Brown Sugar, Sarafina and Lysistrata.
Notable Directing Credits: Get Off (The Bus), Agamemnon, Scarlet Letters, Little Shop of Horrors and Wiley and the Hairy Man (Asst. Direction/Puppet Choreography), Baltimore (Asst. Direction), and The Children from the Blue Mountain.