Synopsis:
This video pans through 3 chapters of Black history, the origins in Edenic utopia, when all was innocent and pure, then briefly passing through slavery, then following our characters into a land unknown where again they must find new truths, new power, and new identities.

This homage to the Black Arts Movement is the product of an all-Black creative team and masterminded by Raehann Bryce-Davis, a rising operatic star now turned Executive Producer. It’s an evocative vocal piece commissioned by and specifically for her by composer Ayanna Witter-Johnson with poetry by Henry Dumas, a civil rights poet killed by police brutality. 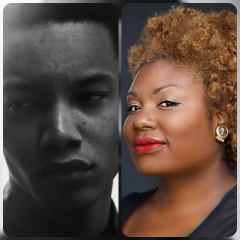 Raehann Bryce-Davis has been hailed by the New York Times as a “striking mezzo soprano” and by the San Francisco Chronicle for her “electrifying sense of fearlessness.” This year, following the Grammy Nomination of her album, Sanctuary Road, she has released two music videos, Brown Sounds in March 2021, a co-production between LA Opera and Aural Compass Projects, and “To the Afflicted,” which was self produced and self directed in the height of the 2020 pandemic, which received much critical acclaim and was chosen as an official video for World Opera Day.

After scientific studies and a degree in Civil Engineering, Jérémy Adonis moved to Belgium to study «Technique of Image & Cinematography». He graduated in 2016 with distinction and by directing his short graduation film: Son of Icarus that screened in different festivals in Europe. In a world surrounded by images, Jeremy values each frame that he considers as powerful as paintings in which he can express himself.