Synopsis:
In Mexico there is a cargo train that runs from the south to the north. For years people have been using this train, by travelling illegally on top of its roof, to get to USA. Because all the dangers that comes with this odyssey, people know this train by the name “La Bestia” which means The Beast.. GUAYABA a young and stubborn Mexican smuggler, is traveling on “La Bestia”. He carries a package, LUPITA, a little girl who’s family hired Guayaba to deliver her to the U.S.A. But an injury caused by the train on Guayaba’s leg makes him sick, and he starts to perceive the train as a giant beast. 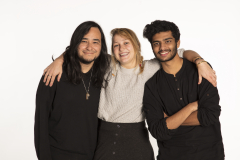 Marlijn van Nuenen Dutch 2D/3D animator that loves to tell stories through film. Advocate for more diverse animated stories and firm believer animation should be considered as an artform, not a medium.