New Light – the Rijksmuseum and Slavery

Synopsis:
What happens when the leading national museum focuses its gaze on the slavery history of the Netherlands? This is the subject of New Light, a highly topical documentary from director Ida Does about the genesis of the slavery exhibition in the Rijksmuseum. This film shows up close and personal how painful and bitter, but at the same time healing and liberating compiling the exhibition was.

Especially due to the contributions of people with roots both in the East and in the West. In New Light we can see what it means when a museum reinvents itself 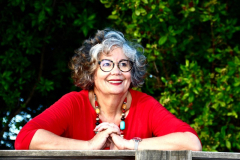 Ida Does is a documentary filmmaker whose work focuses on colonial history, art and culture, social justice and Caribbean literary pioneers. Amsterdam, Traces of Sugar won ‘best documentary’ at the Caribbean Tales International Film Festival in Toronto, where she was also honoured as the best female director of colour (2017). Her prizewinning film Poetry is an island, Derek Walcott has been internationally screened. Earlier, she made Sporen van smaragd, Peace, Memories of Anton de Kom and the TV series Dromen van Curaçao. In Hear her she explres black women who work in Dutch media about their experiences; advocating an inclusive media and film policy.