Synopsis:
In the wake of recurring, violent anti-immigrant marches, Leather Craftsman Kwesi Joseph Acheampong ventures on foot, for the first time, into the soul of a city he has lived overly cautious in for the past 7 years. An intimate glimpse into his proverbial ‘stride of pride’ has Kwesi confront his apprehensions to discover a melting pot of migrants steadfastly plying their trade within this vibrant anomaly of a city founded on a diverse migrant history. We engage in Kwesi’s caravan-esque walk through three city districts that spark nostalgia of Ghana, his place of birth, Ivory Coast, where he leant his craft and his rejection at a German Airport, when he had fled Ivory Coast’s Civil War. 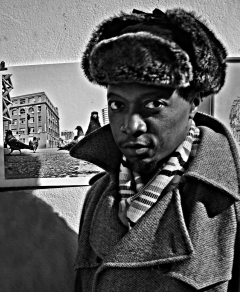