Synopsis:
After a night on the town, two best friends retrace their steps and realize “That Night” might’ve been more than just partying. 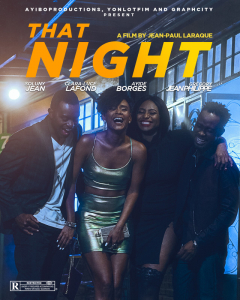 Jean-Paul Laraque, Haitian director and co-founder of Graphcity S.A, Haiti’s largest production company. But very soon he realized his love and talent for directing and now has over 16 years of experience in commercial, sports, entertainment, and film production. He has directed hundreds of commercials, and over 50 documentaries and corporate films for prestigious local Haitian businesses, international firms & NGOs. His wide range of experience and accolades within the commercial world inspired him to direct his first short-film “That Night,” which has created a lot of buzz in Haiti and with the Haitian Diaspora.