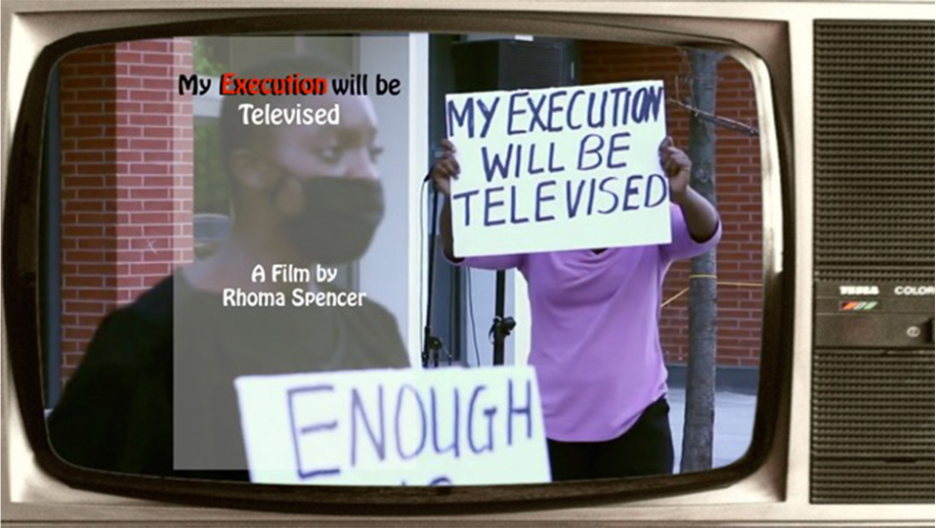 Awake and Aware  reminds us of this year’s theme of the festival as we take an international journey from Benin through the UK and back to Canada as our short films showcase how to tackle tough issues such as race, politics, family and even a pandemic in thoughtful and meaningful ways. This is anchored by the film AfterShocks: A Tetralogy of our Times which is in itself a mosaic of stories that explore love, humanity and survival during the coronavirus pandemic in the Caribbean American community.

My Execution will be Televised

The historical resonance of the Black Lives Matter Movement is told in this short documentary film. It shines a light on the many Black bodies killed in Canada and the US from the hands of the Police. In 2020, when the world witnessed the Public ‘lynching’ of George Floyd live on Facebook, we have not been the same ever since. My Execution will be Televised, a mash up of Gil Scott Heron’s The Revolution will be Televised turns the lens around from Public Lynching on Poplar Trees to Facebook Live. The film is inspired by a BLM March placard.

Olivia, a trainee professional, finds herself opposing the government that is seeking to criminalise her mother. ASUNDER offers an intricate story about family, politics and justice.

A brown women’s identity is questioned at every turn, highlighted through her conversations inside different taxi rides. This story is for now. Its a story that aims to shine a light on the nuances that surrounds the topic of identity, feminist issues and judgements many woman of colour are often faced with; especially within their ‘own brown’ community which is rarely spoken about. Often there is a blur between cultural lines, expectations and respect.

Despite all his mother’s arguments to dissuade her, Houminvi, an Abikou child, insists and decides to go to Europe to make his dream come true. She will face dark obstacles. But saved by the ocean, she will be miraculously brought back home.

Leon is a mixed-race teenager trying to work out where he fits in. He is close to his Nan, the only person he know
from his Jamaican side of the family. He goes to his Nan’s Nine Nights and meets the rest of his family for the first
time where he begins to understand, identity is more than skin deep.
A mixed race youth is awoken by strange dreams and visited by a figure that keeps appearing once he’s
awake. Heading to his nan’s for solace he discovers she’s passed away, his presence not wanted by his extended estranged family. When the figure leads him back to his nan’s house he pushes through the awkwardness of the strained family relationship, and sees the spirit of his nan one last time to say his goodbyes. His presence is finally accepted by the family he hardly knows, and balance is restored.

Susan,ayoungwhitewoman,ishesitanttomakeher relationship with Jordan, a young intelligent black man, official due to her parent’s hidden prejudices. When an opportunity presents itself to show their true colours, Susan pretends to be pregnant with Jordan’s baby. As events play out, her parent’s empty efforts eventually peel back to reveal their true racist beliefs.

SARAH completes her makeup routine, a transformation from healthy mother-to-be, to sick hospital patient. Begrudgingly satisfied, she is about to leave when the door to her flat bursts open and footsteps rush toward her causing her to freeze.
Her husband John rushes into their bedroom out of breath and quickly conveys their dire situation; her immunity to a global pandemic has been uncovered and they need to leave immediately. They’ve anticipated this day, their escape plan already organised, they quickly pack to leave, but her husband finds a key component to their escape has been separated from their escape packs.
John confronts Sarah about the pair of injector pens which should be packed, but Sarah believes they will harm their unborn child and is not willing to take the risk. John disagrees, believing them to to be the only way they can escape successfully if there is a check point.

With no time to argue they leave without resolving the conflict and find themselves on a coach to escape the city. Some way into the journey the coach is stopped and a shrewd health investigator boards, informing the passengers an ‘Immune’ may be onboard. The passengers all exit the coach and line up awaiting their turn to be tested at an ad hoc check point.
Joining the back of the queue Sarah tries to think of an escape plan, but with armed security all around John takes matters into his own hands. Using one of the injectors he administers a dose without Sarah consent.
Furious and feeling betrayed Sarah demands the second injector which will counter the damaging effects of the first but John foresaw this and left it on the bus out of reach. Sarah must now find a way to get tested as fast as possible before any harm is done to their child.

Suddenly one of the passengers at the front of the queue disarms the investigator and an armed guard takes swift action, disabling the passenger who tries to kill herself before being caught. With luck on their side Sarah spots her chance. Stepping out of the queue, Sarah offers her husband’s expertise as a doctor to the wounded passenger who could be immune.
Initially taken aback by Sarah’s gamble John quickly falls in line to avert suspicion however the sly investigator corners Sarah while John is distracted. Curious as to why Sarah would carry a child to term during this pandemic and then suspicious that a doctor would be on a labourers’ coach. With quick thinking Sarah averts his suspicions as John stabilises the injured passenger. The investigator decides to take John with them as they carry the passenger away to be tested by the government.
Free to go take the antidote, Sarah has survived this test, but to save her child she has lost her husband as she must continue her journey to safety.

Aftershocks: A Tetralogy of Our Times

Aftershocks – A Tetralogy of Our Times is a mosaic of short narratives, animation and montage art that explores love, humanity, and connecting while socially distant from the unique perspectives of Caribbean American communities in New York City during the coronavirus pandemic. Take a journey with us through Queens, NY from 2020-2021 and witness offbeat, love-filled stories of Caribbean American characters endeavoring to overcome the impact of the coronavirus pandemic.